Bill Collins, the Owner of Interstate Truck Driving School, has been racing cars (and trucks) since 1968.  Recently, Bill has been road racing with the Sports Car Club of America in the #63 Interstate Truck Driving School Corvette.  The Vette is an 04 Z06 prepared by Doug Rippie Motorsports in Waverly Minnesota.  Bill's car chief is Pat Stair who has built several winning cars over the years.  Bill has had a lot of friends help him at the track including Steve Kuehl from Inver Grove Heights.  One of Bill's team members over the years, Steve Carter, passed away recently and will be greatly missed by everyone on the team.

Bill won National Championships with the Corvette in 2018 and 2019 and 5 Conference Championships over the last 6 years. Interstate Truck Driving School also sponsors Sam Silver in her Mazda Miata, also racing with the Sports Car Club of America.  Sam is very successful in the Spec Miata class and may be replacing Bill in the Corvette soon. 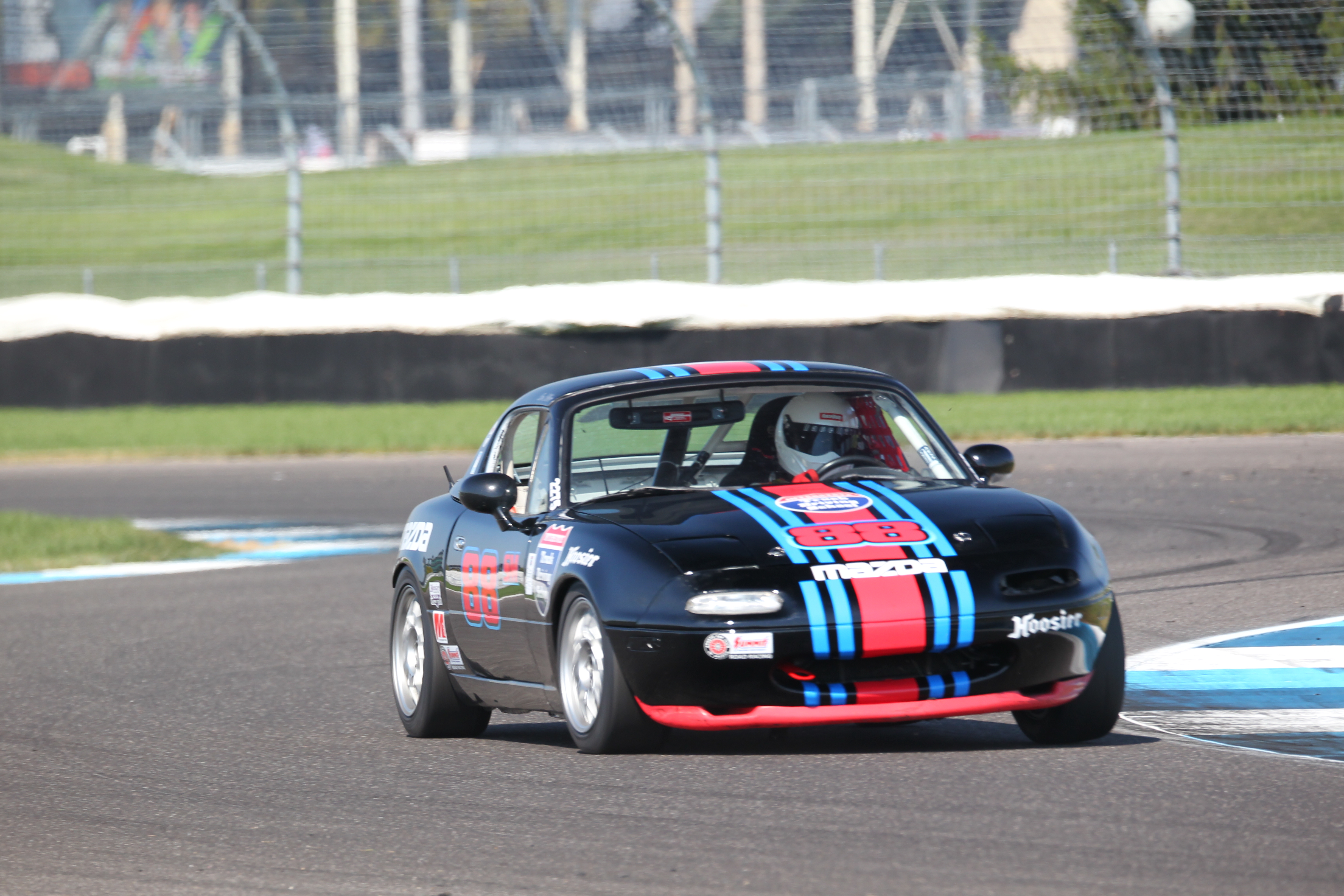 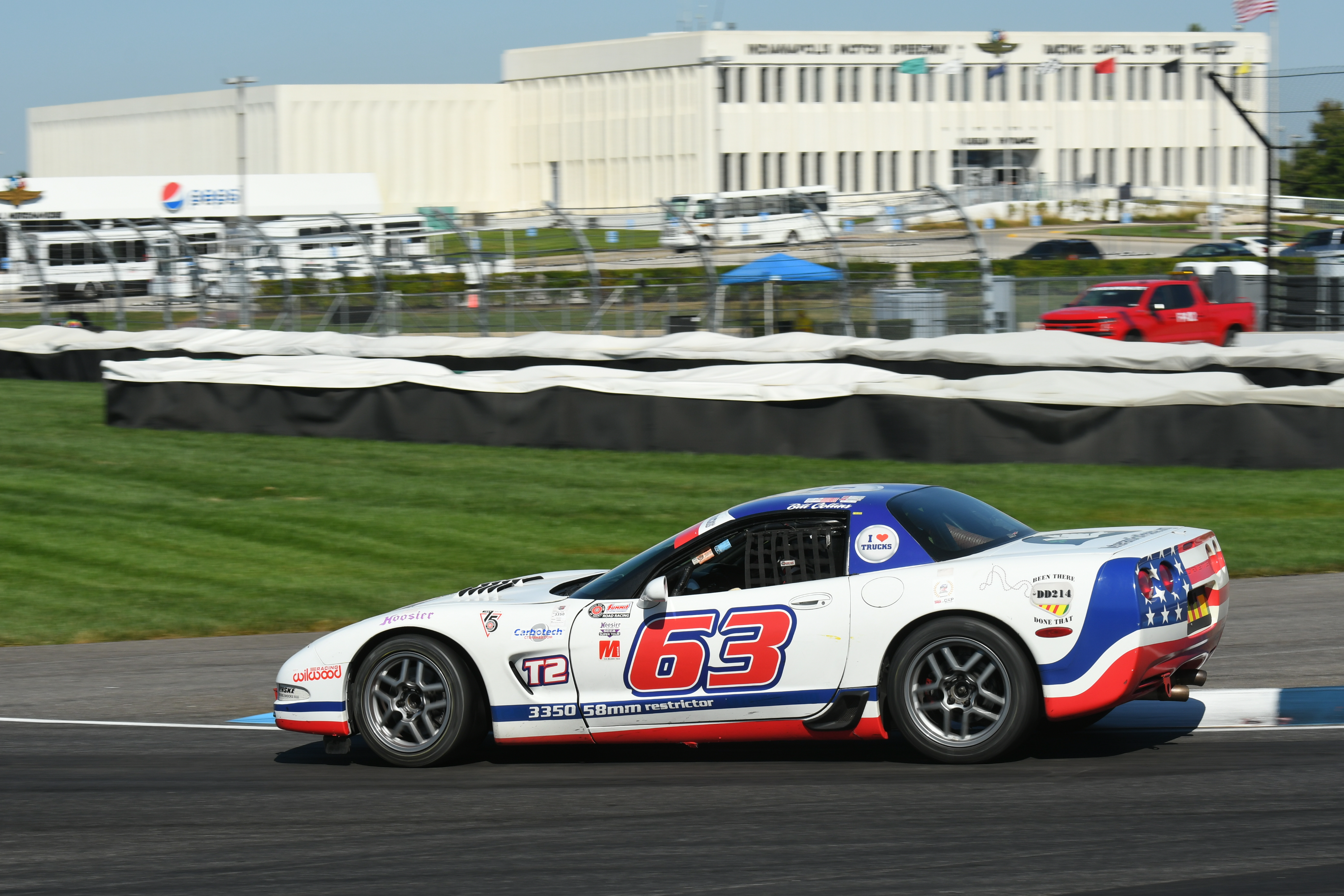 Bill ran several races with the Vette in '21.  The highlight of the season was one win at Blackhawk Raceway in Beloit Ill, two wins at Mid Ohio Sports Car Course and the National Championship race at Indianapolis Motor Speedway the first weekend of October.

The Miata was not very reliable at the start of the season so Bill missed several races.  Bill was hoping to be able to run as fast as Sam but she is too dang fast and he could barley keep up at best.  Bill did qualify the Miata for the big race at Indy.

Sam Silver did a Great job with her Miata.  She won some very competitive races, also at Blackhawk Farms Raceway.  She also won the 2021 Conference Championship in the Spec Miata Class!

Here is the recap of the National Championship races at Indianapolis Motor Speedway:

Bill qualified the Corvette 18th out of 26 cars for the T2 race.  At the start, he was working his way up the field and by the 5th lap was in 12th place.  Going into turn 1, a wheel bearing failure knocked out his ABS and he locked up the brakes big time resulting in 4 seriously flat spotted tires. The vibration from the flat spots required two pit stops and dropped Bill down to 21st position, two laps down from the leader.  It was GREAT for 5 laps and the car came home in one piece!

Bill was supported at the track by Pat Stair, Steve Kuehl, and Tim Hoskin.  The three of them worked their butts off to get the car as fast and reliable as possible.  It was not easy with the heat and the tight schedule.  Bill is very grateful for all of their effort and dedication!

Sam Silver started the 78 car field of Spec Miata's in 38th position.  She immediately moved up to 30th at the end of the first lap.  The SM class is really cut throat and Sam got bounced around by other cars and finished 37th.  She runs a 1991 Miata, much older than the cars that finished ahead of her, so her finish was a significant accomplishment.

Bill did not qualify as well as Sam in the Spec Miata field and had to run the last chance race where he finished 3rd.  He then started the feature race in 63rd position and ended up 62nd, again with the car in one piece!

Both Miata's were supported by Advanced Autosports headed by Ben Merwin. Ben and his team did a great job keeping both cars running at peak performance all week.

Plans for the 2022 season have not been firmed up yet but Sam has already run her first event of '22 at the famed racetrack in Sebring Florida.  Stay tuned for details...... 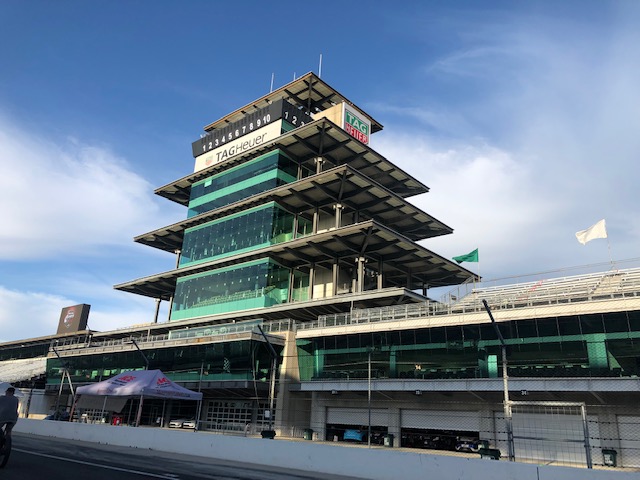 Race Quote:
Indianapolis Motor Speedway was the location of the 2021 National Championship races

Sam hit the track with a vengence while Bill debuted a new Miata for the Spec Miata class and did some laps with the Corvette to get ready for the Majors event at Blackhawk in May. 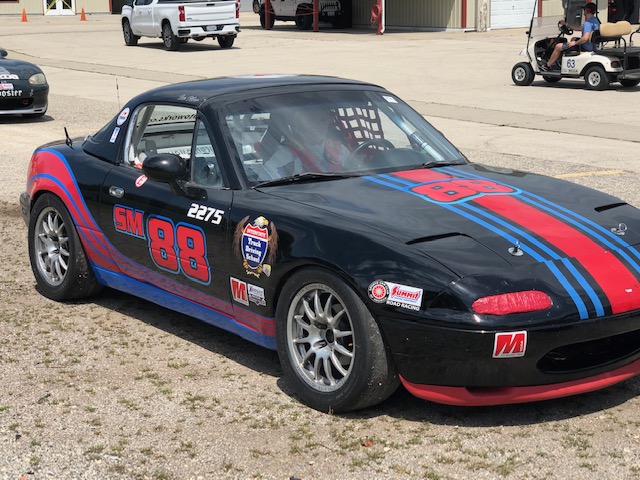 2021 Racing Season  With COVID finally losing some of it's grip on our lifestyle here in the United States, the Interstate Racing Team started getting the cars prepared and headed off with high hopes for the season. 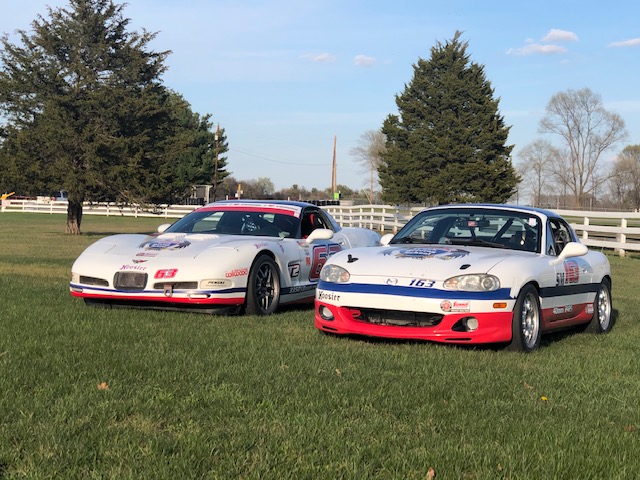 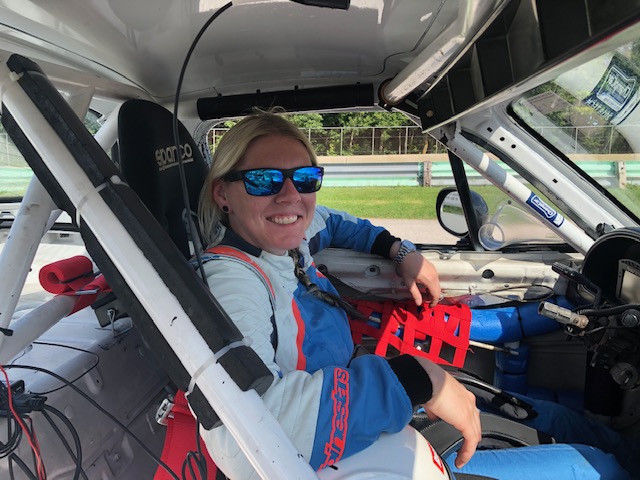 2020 Racing Season.  COVID 19 put a real hamper on racing in 2020.  The highlight of the year was races at Elkhart Lake, WI at Road America.  Bill finished 7th on both Saturday and Sunday at the June Sprints.  At the end of the year, SCCA held it National Championship Runoffs at Road America where Bill had a transmission fail on the 4th lap of the race so he did not finish the event.

The one bright spot in 2020 was the addition of Samantha Silver to the team.  Sam runs a 1993 Mazda Miata in the SCCA Spec Miata Class. She has several years of experience in go carts and almost 10 years experience in the Miata. The Interstate Racing Team has helped her with a new motor to help her run at the head of the pack. 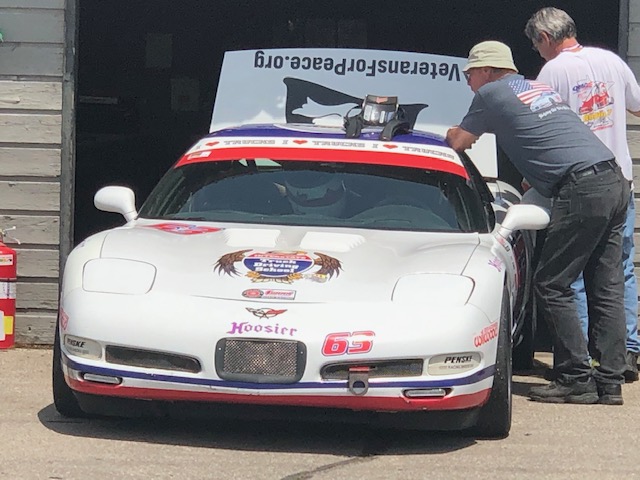 The 2019 Season started at Road Atlanta in mid March.  Bill had never been to Road Atlanta during his career so he spent a lot of time on his driving simulator to prepare.  That sim time paid off with a 2nd place finish behind Michael Levine who has a lot more experience at the track.  Bill's first win of the year came in April at Hallet Motor Raceway in Oklahoma.  Later in April Bill and his team of Steve Kuehl and Mark Knepper traveled out to Virginia International Raceway, another track that Bill had not been to previously.  The season ending Championship race was scheduled at VIR in October so there was a really strong field of cars at the April race in preparation for the Championship run and Bill managed at 5th place finish.

Next up was May a road trip to Portland for the Interstate Team where Bill picked up his second win of the year.  The June Sprints at Road America in Elkart Lake WI are a big tradition for anyone that races in the Midwest.  Bill choose to run the Corvette in a different class to experiment with a different set up and picked up a 3rd in the T1 class.  Then in July another road trip to the west coast took the team to Laguna Seca just south of San Francisco where Bill finished 2nd to one of the factory BMW race cars.

At the Championship Runoffs in October, Bill faced his strongest competition.  He had a great race with a couple of independent drivers while the Professional teams took the top 7 positions.  Bill finished 10th behind Michael Levine's Mustang and James Lithouser in his BMW. 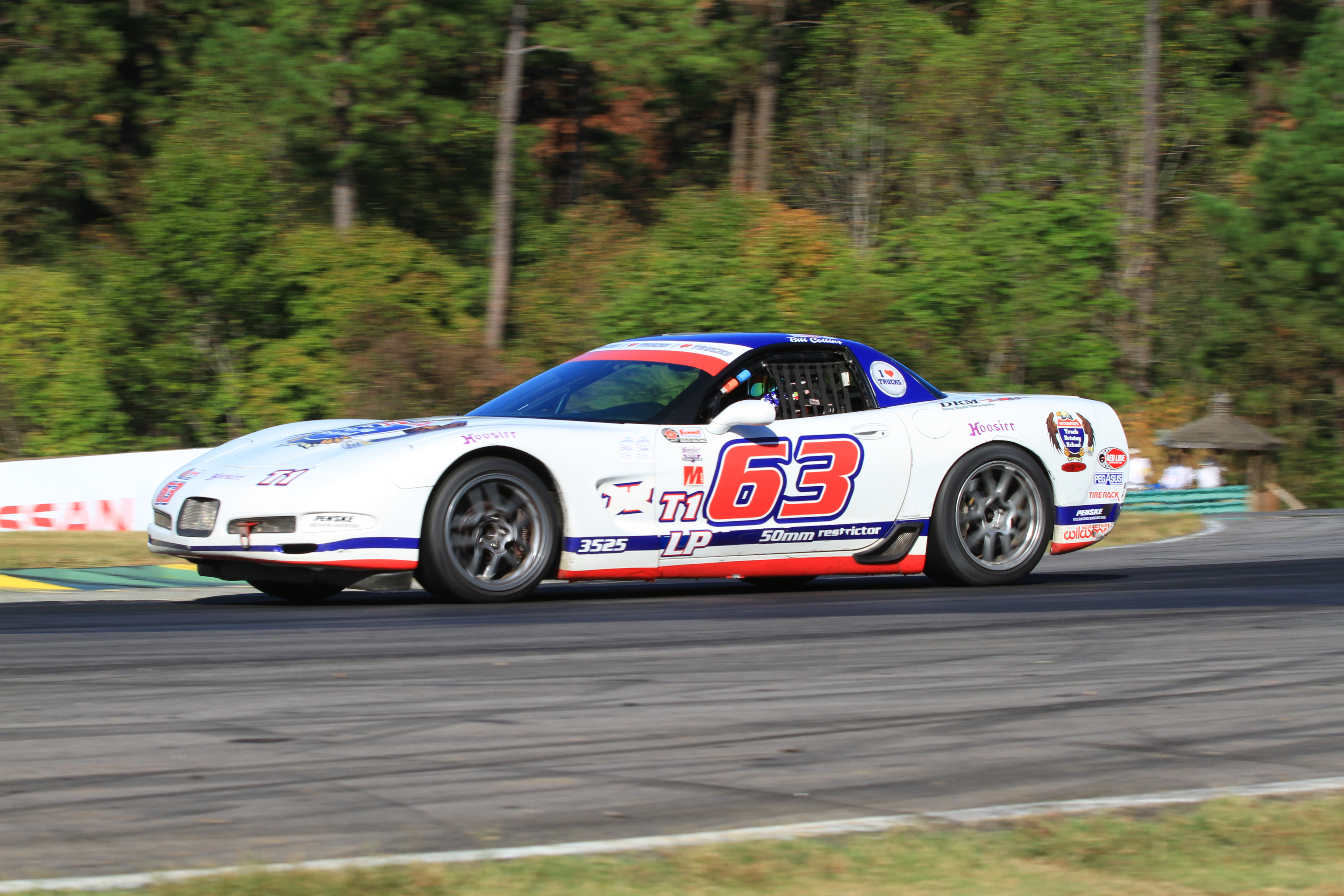 Interstate owner Bill Collins recaps his 2018 season where he won the SCCA Super Tour Points Championship for the second season in a row. Will he return for #3? Watch and find out. 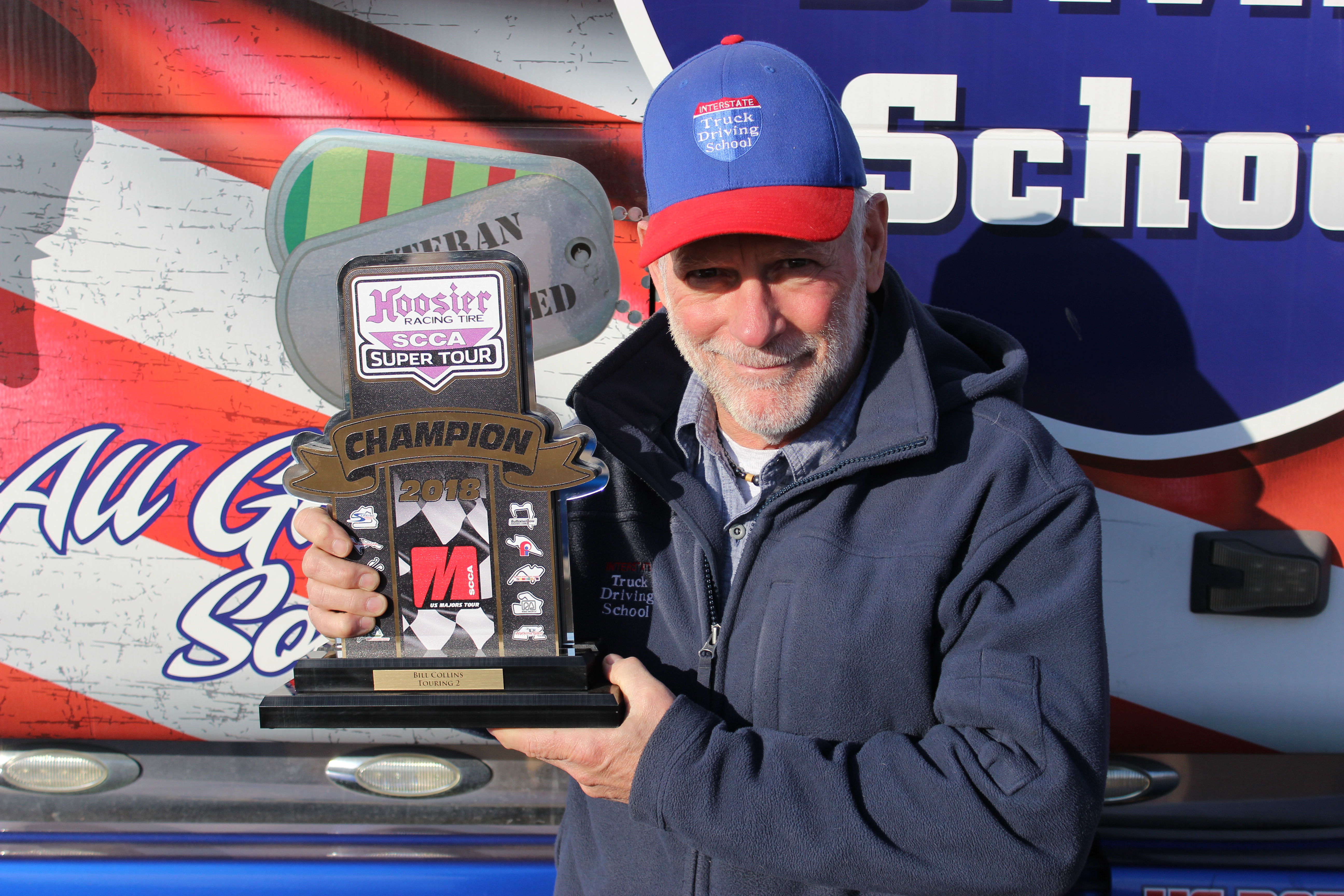 Race Quote:
"It was a very good year!"

The first race for 2018 for the Interstate Truck Driving School Corvette was at the famed Sebring Race Track in Florida.  Sports cars have been racing at the airport based track since 1952 every March in the 12 Hours of Sebring.  Famous drivers from all over the world have competed at the track and Bill Collins, who has raced cars for over 50 years, has always wanted to race at the a historic venue.

Bill got his chance this January with the SCCA Hoosier Super Tour Series.  Bill had won the Hoosier Series Championship in his class in 2017 and figured the best way to defend his title was show up at the first event of the year. Along with crew members Steve Kuehl and Darrell Peterson, the team made the long trip down to Florida the second weekend of the new year.

Since Bill had never raced at Sebring, he spent several hours practicing on a racing simulator.  Students at Interstate Truck Driving School use simulators successfully to prepare for a career in trucking and Bill finds the sims equally helpful preparing for a new track.

The competition was stiff with Mark Boden in his Porsche 911 and Preston Calvert in his Mustang the top guns.  Both drivers had raced at Sebring several times previously so Bill had a real challenge trying to compete with them.

Bill qualified 3rd for the first race of the weekend on Saturday.  Boden and Calvert got the jump at the start and pulled away from the Interstate Truck Driving School Corvette.  Calvert broke the transmission on his Mustang half way through the race and Bill lucked out with a 2nd place finish.

On Sunday, the Interstate Team made some adjustments to the Corvette and Bill was determined to pull out the stops to try to compete with the more experienced duo.  At the start, Bill jumped inside the Porsche to contend for 2nd.  The pair ran side by side for several turns and Calvert pulled away.  Collins decided to drop behind the Porsche to chase down the Mustang before it got too far ahead.  Boden and Collins stuck together and ran Calvert down in a couple of laps.  For most of the rest of the race the three cars were nose to tail.

Finally, Boden stuck his nose under Calvert and got ahead of the Mustang in turn 1.  Bill knew the Porsche was faster than the Mustang so he had to pounce immediately or lose any chance at victory. Bill got a better run than Calvert coming out of turn 4 and attempted an inside pass at turn 6.  With a little too much gusto, the Corvette got past both the Mustang and the Porsche but ran wide at the corner allowing both cars to get back by.  As the two other cars passed Bill's Corvette, the Chevy was bumped in the right front and Bill spun off the track.  He did a 360 and took out after the top two but there was not enough time left in the race for him to catch back up.

Bill was very excited to finish in 3 after such a heated race with two very good drivers.  Bill even nailed down the fastest lap of the weekend in the class as he chased Boden early on.

The next event for the Interstate Truck Driving School Racing Team is Circuit of the Americas in February. 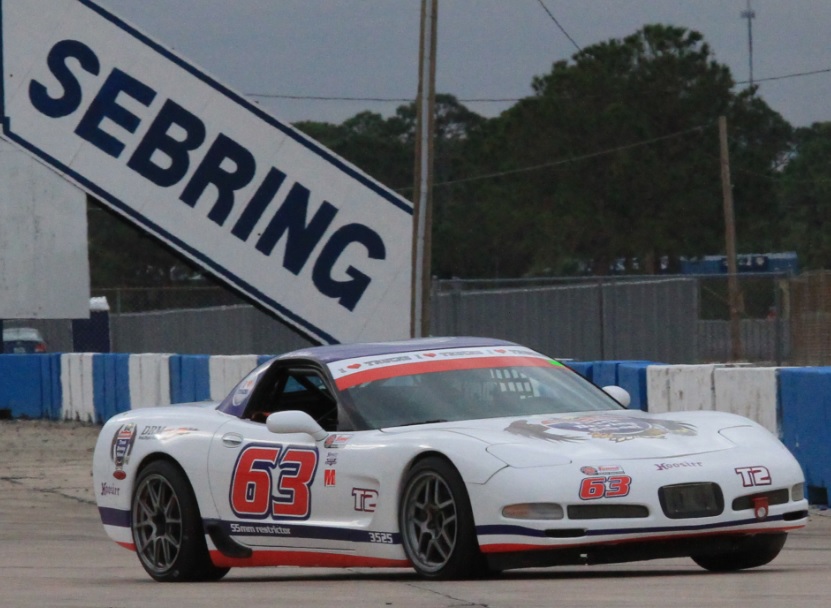